It was a ‘turbulent’ year for Gemini - in the good sense of the word. We’ve carried out a huge amount of work and the work is going according to plan. Now that the year is almost over, what are CEO Matthias Haag’s thoughts when reflecting on this year? And what are his wishes for 2016? 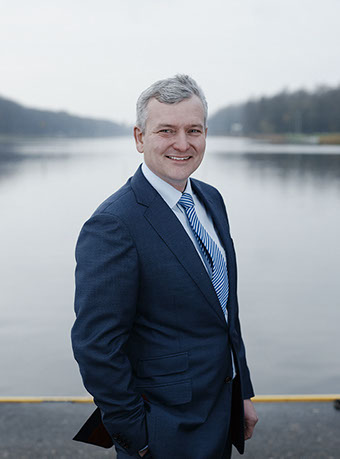 Gemini was very busy with the realisation stage in 2015.

How do you feel this went?

‘2015 was an unbelievably busy year. I texted my wife yesterday: “Not flying tomorrow!”. It was the project’s most intensive year until now, but we achieved a lot. Our people have moved mountains. And managed all this on schedule. And the year’s not over yet; in the coming weeks we hope to energise the offshore platforms, which means that they will be powered. That would be a fantastic final performance for 2015. Whether we manage this depends on the December weather.’

What made the biggest impression on you?

‘Placing the foundations - 150 units at a record speed of 110 days - was extremely special. Van Oord really did a great job. But this also applies to the construction of the entire electrical system buried offshore and especially the laying of the cable. Or the construction of the land station in Eemshaven; the size of two football pitches. Not to mention the installation of the two platforms on the jackets; true precision work. If you see everything listed like this it does look rather special. Each one is a mega project in itself. And it’s something not really previously demonstrated on this scale.’

And what about the New Year; what’s still to come?

‘We’ve certainly not finished yet. Installing 150 turbines, attaching the blades. And doing this at a location where the average wind speed is 11 metres per second.’ But laying the infield cables is also a considerable job. So, next year will probably be just as busy as 2015. In the first quarter, we hope to achieve the moment of first power: the first power generated by wind. And that's a huge milestone. We hope to be completely finished by the end of the year. In the meantime the organisation is already switching to the operational phase. The constructors need to transfer everything: technology, security, maintenance. This will also be an important challenge for 2016.’

‘I hope we can continue working at the same pace, so that we can really have achieved something by the end of 2016: installing half a nuclear power plant at sea in under three years. But in our case a “green”, entirely sustainable power plant. I also want to wish everyone who works at Gemini a healthy New Year. Several hundred Gemini people are working on and offshore, and not in the easiest of conditions. Safety and welfare will continue to be the most important themes.’